We dropped in at the Dirty Dog bar in downtown Austin on 6th Street for the Texas Birthday Bash IV, hosted by Victory or Death MC. It was very well attended, considering how cold the weather was today. They had a CROCKPOT Cookoff, which tuned out really well. As you might imagine, a crock pot holds quite a lot of tasty stuffsand very little of it is needed for the judging, so the rest was given away to the attendees. That would be us. And tasty it was too, with a good variety of flavors. You will have to look t the photos to get the idea. One of the ladies also backed some wonderful deserts, three pies, lemon squares and a cake. So desert was well taken care of. Here are a few pictures;

PS: We arrived a bit early, so we headed down a few doors to Casino EL Camino for what was described to us as “The Best Burger in Austin”. It was wonderful, Debbie and i shared one and it was plenty, with great flavor! 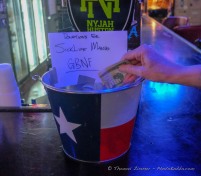