After church, I headed out to south Austin to the Star Dust Bar to drop off some school supplies. The temperatures today aren’t quite as high as yesterday, so we aren’t going to get blistered. I headed inside after arriving to drop off my supplies, and met Janice just inside the door, obviously waiting for me. I dropped off the stuff and we talked for a few minutes before we had lunch. I must say the lunch which was bbq brisket and sausage was very fine, but the potato salad and beans were out of this world. Now to be clear, it all went together superbly. The meat was done on-site, by club members, as you can see from the photos. I don’t know who made the tater salad, but it was scrumptious. The beans were provide by the mother of one of the club prospects. Apparently she either works at or owns the “Taqueria #3 LA Escondida” in south Austin on Ben White Blvd. True food to write home about. Oh, here are a few photos. Most are doctored a bit, particularly the shot of Old Filthy, which I made to look… Well old and filthy. Enjoy! 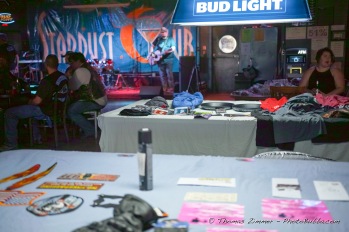 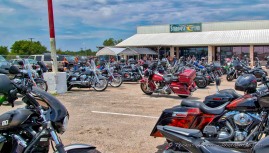