We had some severe weather last night, as you can see from the first photo of the TV radar. The Rally got hit pretty hard, and our Hospitality tent git kind of smashed, with several of the tent poles being rather severely warped. Fortunately several of the local Bandidos MC members came to our rescue and straightened the poles, and put the tent back up so we could continue serving our refreshing cold water and hot coffee. Thank you Bandido Shadow and brothers 🙂

Debbie and I arrived a bit after 9am and when we got to the tent everything looked pretty good. We will need a new tarp, and some of the poles will need to be replaced, but on an additional note, we have also been offered a large tarp from another CMA chapter that sound like it will serve well. Thanks !

As for the rest of the day, we assisted with hospitality and then later headed over to see the Evel Knievel exhibit in the arena. There were lots of interesting Evel items, including photos, riding suits, helmets, the Rocket and a couple of motorcycles. Debbie went up to talk to Doug Danger, who is doing the 15 car jump tomorrow on one of Evel’s Harley Davidson motorcycles, and toward the end of her conversation she was was blessed to be able to pray with him for safety during the jump tomorrow. The ramps he is using were blown over by the storm, so they had to be set back up and checked for safety. It would be good for y’all to pray for safety as well.

We also visited the COC&I Defenders table in the Arena, and the Safety And Awareness table. These were both being manned (or woman-ed as the case may be) by our friends from the local clubs and independents. It is always good to see them, and they were getting a good level of interest.

Well, enough of my words, on to the pictures.

Smashed Hospitality Tent, but serving hot coffee. Thanks Randy for the photo. 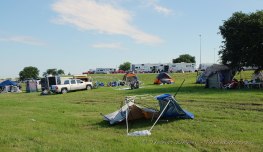 Lot of other people had their tents smashed. 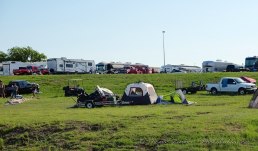 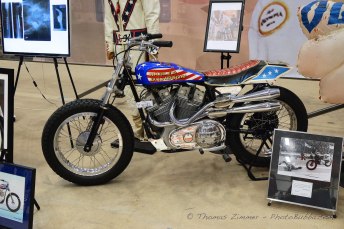 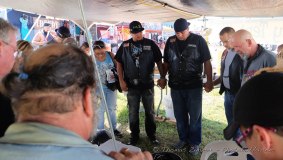 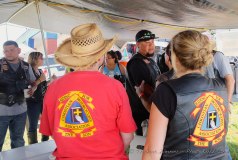 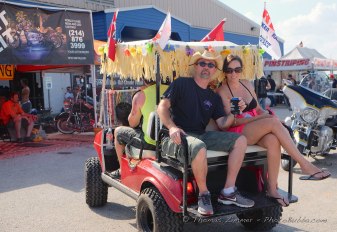 Friends on their coach.

Blessing of the bikes.

This is very nice Debbie.