Renaud came to church this morning, and after church Debbie and I were blessed to bless him and his bike as he prepares to go on an around the world tour on his KLR. Go with God Renaud, and He will go with you!

Let him who has an ear, let him hear!

We had the UCOA meeting this evening at Texas Mist. Everyone was in attendance, and it was a good meeting. We heard about a few changes for the new year, and Doris, the secretary of JW-ROCK was there to distribute the family information for the Christmas toy and food basket deliver. Exciting stuff coming in December (toy runs), and we look forward to legislative day in January 2017. 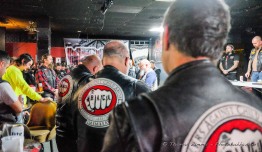 Oh, and here is my super moon photo from a couple of nights ago;

Just over a week ago we had the most contested election for President that I can remember. It was like going to a bare knuckle boxing event, with no holds barred. Russia got into the act,Wiki-Leaks got in, twenty year old video tapes were dredged up, Bernie got cheated, and everyone threatened to sue everyone else.

But, here we sit, a week later and the college students are rioting, Trump is neck deep in the process of picking a cabinet and movie stars are crying sob stories on Twitter. Meanwhile the rest of us are going about our lives as if nothing happened, because really, nothing much has happen, or will happen until next year sometime.

So, whether you hated Hilary, or you hated Trump, the decision is made, and we all have to move on.

I will tell you a secret about how I am moving on. You see, I wasn’t really all that stressed by the election, because whoever got elected, I know who is really in control.

In Proverbs 16:9 it says; “We can make our plans, but the LORD determines our steps.”

It doesn’t say all the steps will be easy, but you can be sure you are being watched over.

In Jeremiah 29:11 it says; “For I know the plans I have for you,” declares the LORD, “plans to prosper you and not to harm you, plans to give you hope and a future.”

So, as we walk into a hopeful future and watch our newly elected President experience God’s plan unfolding in his life, we should remember the words we speak each month;

“I pledge allegiance to the flag of the United States of America, and to the republic for which it stands, one nation under God, indivisible, with liberty and justice for all.”