Calaveras MC is having their annual benefit to collect school supplies and coats for kids tomorrow at Ironwood Icehouse down on Hwy 71 at the old location where Cindi’s Hawg Wild use to be. The event will run from Noon to 6PM, and there will be five music artists and bands. Cover is $5, and Fajita plates are $5. Here is the flyer, I hope to see y’all there.

We traveled out 71 South to the old Cindi’s Hawg Wild “building” which is now Ironwood Ice House. They claim to have the best burgers on 71, and I have to agree, they were very good. The COC&I meeting started at 1pm with Gimmi jimmy. He was great as usual, but I was particularly pleased when he asked if anyone had brought their weapons to the meeting, and everyone said no. Then he said he had his weapons, and he held up copies of the Bible and the US Constitution. All I could say was AMEN! Later, we heard from each of the COC&I regional leaders, and then at the end Wes presented Betty Boop with the US Flag that had been flown over the Capital in honor of Mohawk who was shot in Waco. 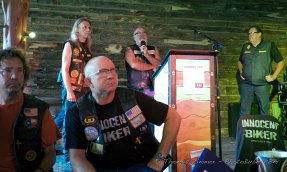 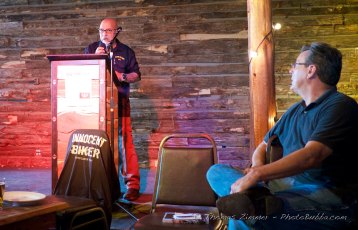 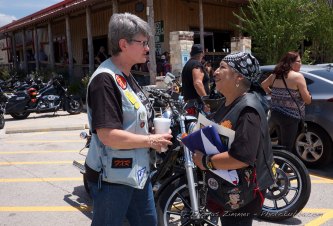 Lewis decided he wanted to try his hand at BBQing a pork butt, so he invited our New Life Riders CMA chapter over for a Saturday afternoon meal and fellowship. we had a good size group, probably about 20 people. Everyone brought their preferred side dish, so we had lots of salads and desserts for this hot day. Jim brought his Ladder Ball game, so we could all practice our bolo throwing, and we all (well I all) stuffed our (my) selves on burgers, dogs and pork butt. I naturally got sleepy shortly after lunch, and managed to find a quiet area for a quick nap. Of course it wasn’t all that quiet with my snoring I guess. Good times. 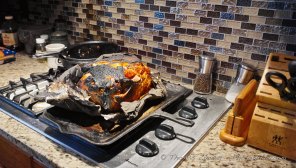 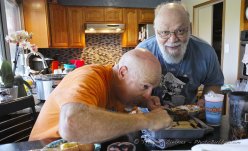 We had out July UCOA meeting this evening, and it was very well attended. We even had new clubs show up to join UCOA. There are a few summer events coming, so be sure to check out the UCOA calendar at http://ucotexas.org. 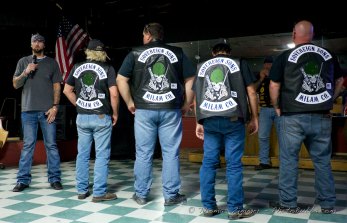 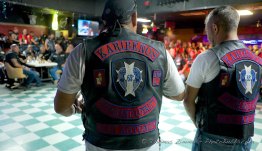 Johnny (Levi) having his bike blessed.

He got his head blessed too!

We had the Christian Unity meeting this evening, and we had visitors from  Christian Unity chapters in San Antonio, and Killeen. It was a good meeting, good BBQ and good fellowship. 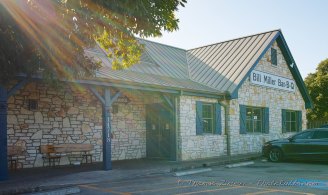