Debbie and I went to Bike Night at Spinners for dinner this evening. We arrived around 6:45, I guess it was a bit early, seeing as we were just about the first ones there, but the stewardess, I mean waitress was friendly and attentive. We diverted from our usual fare (the Blue Cheese Burger) and ordered the Spinners Specialty Chipotle Burger. Very tasty! The music was also good, and made for a relaxing biker kind of atmosphere. As we were enjoying our food, lots of other people arrived to fill the place up. As you can see from the photos, all the marked off bike parking area was consumed. The first two photos are of course of my beautiful wife as she donned her Colors. Ignore the red car behind her. 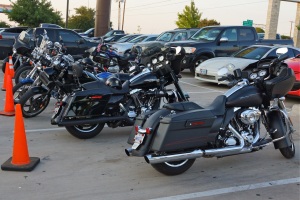 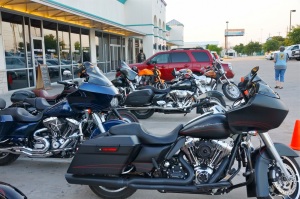 Last Post: Sunday morning, Joe gave the message, and it was great as usual.  After the service, we headed back to Austin, and stopped in Crawford for a few photos. 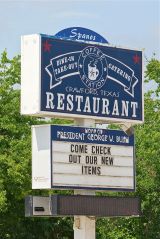 Saturday evening, we were treated to a concert by Eddie B.  If you haven’t heard of him, he is a very talented musician, and entertainer. Also a few shots of friends. After the concert, there was a jam session out back near the ice cream store. 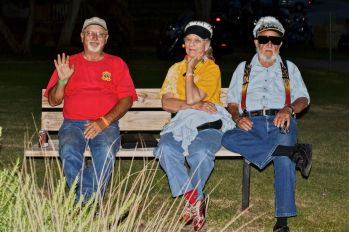 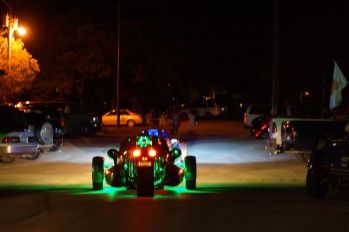 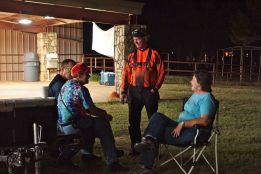 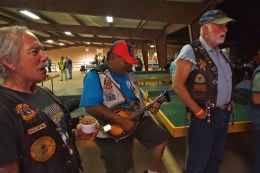 Next stop, was the famous dinosaur tracks exhibit just south of Glen Rose.  I can’t say they were all that impressive, but they did look like dinosaur tracks, so there you go.  More impressive were the life sized dinosaur models that were created for the Worlds Fair in the 1970s.  After the fair, they were moved to this permanent site.  Wow, are they BIG! 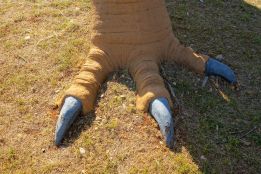 After the service, Debbie and I headed off on a field trip to visit the log cabin home of a friend’s Great Great Grandfather, located in Rio Vista not far from Glen Rose.  Apparently,  in 1849 Henry Briden was the first “white” settler in the area, and his cabin was maintained locally until 1974, when the State of Texas declared it a historical landmark.  That year, it was moved three miles to it’s current location in Rio Vista.  Today it sits right next to the local Police Station, which was built sometime later. We arrived in Rio Vista without difficulty, and found the cabin pretty easily.  Debbie has sharp eyes for such things. We looked it over and tools a few pictures, and then noticed that it had a pad lock on the door.  We decided to ask at the Police Station to see if they had a key.  As we walked up to the station, a very nice officer asked if she could help us.  We asked bout the key, but she said they didn’t keep it there, that the Mayor had the key.  She gave him a call, and after a shot conversation, He volunteered to come over to let ups in. Wow, talk about great people.  Anyway Mayor Hutchison arrived after a few minutes, and spent about 1/2 an hour with us sharing the history of the building and town.  We had a great time.  After visiting the cabin, we headed over to the cemetery where henry Briden was buried, and took a few pictures there. Definitely a highlight of our trip.