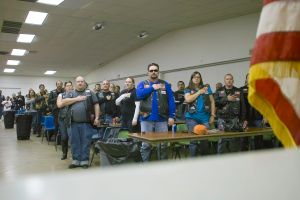 The festivities start at 11AM and conclude at 3PM.
There is no charge for attending, or lunch.
Free Rally Pin until they’re gone.
Lunch at noon is provided.
Fellowship.
Bike Games.
Silent Auction.

This is not a sanctioned event, but you are certainly encouraged to
come and join in the festivities. We hope to see y’all there!

This “moment” was written and presented to UCOA by my lovely wife Debbie.

On Saturday, we went shopping for new helmets. We were in one of the local motorcycle dealerships and were checking out the new bikes on the way to the back wall where the helmets were. One, bike in particular, caught my eye. It had a red, white and blue paint scheme and a more retro seat, real cute. A gentleman of our age walked up to us and asked if we knew how much it was. Seemed he was having trouble finding a salesperson to talk to him, which is unusual ’cause normally they attack you like flies once you walk into the store. We wandered off and soon were approached by, you guessed it, a salesman. He asked if he could help us. We told him “no” but the man over there, standing by the red, white and blue bike, has some questions. The salesman identified the bike correctly (we were about 20′ away) and wanted to know if it was the guy in the black shirt and cap (who wasn’t standing near the bike). “No, he’s wearing a light blue shirt and standing by the bike.” As we walked over toward the bike, It wasn’t until we were about 6 feet away, that the connection was made. This man, for some reason, was invisible to the salesman. Tom bought a helmet and we left thinking how strange that was, for someone so obvious to be so invisible.

That made me think more about the whole “invisible” thing and is there something to be learned from that event. Now, there are times when you think that being invisible might be a good thing, like when you “accidentally” run that red light. Or, there are times when I’ve said or done something foolish and I wish I could disappear. But, when it comes to riding a motorcycle, being invisible is a bad thing. We all know of people who have experienced near, or actual, accidents where the person at fault, “just didn’t see them”. We have bumper stickers, signs, and even a public service announcement on TV about looking out for motorcycles. And we have safety seminars about doing our part to be less invisible or at least to drive while watching out for the other guy ’cause he probably isn’t watching out for you.

No one likes to be invisible, whether you ride, drive or do neither. One of the basic needs of the human heart is to be significant and accepted. That’s why many join clubs or churches, to find a place where they can “belong”. God made us that way. That’s why there are so many “one another”s in the Bible. Pray with one another. Encourage one another. Laugh with one another. Cry with one another. Some people are naturally social and get involved. Others are more “watch from the sideline” types and easily become invisible. I encourage you to look for them. Not everyone has to be your best buddy, but it only takes a few seconds to say “hello” or shake a hand, or even smile or nod at someone to let them know you acknowledge their existence. There are times when you are alone or even feel lonely, but you never invisible to God. We are all His creation and He watches over us. In Psalm 33 it says; “The Lord looks down from heaven and sees the whole human race. From His throne He observes all who live on the earth. He made their hearts, so He understands everything they do.” and in 2 Chronicles. 16 it says; “The eyes of the LORD search the whole earth in order to strengthen those whose hearts are fully committed to him.”

Is your heart His? I am strengthened by the knowledge that I am never invisible to God. As Tom would say, “How ’bout you”?

CMA Day of Prayer was today, a group of us met at 5 Guys Burgers for lunch, and then headed over to Hill Country Baptist Church, just down the block, where they have a very nice Prayer Garden where we could all get together and, yes you guessed it, pray. We had a wonderful time, and even had a couple of visitors. It was great. 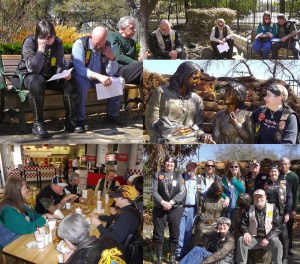