I am sure you have all heard me, or some other pastor say that Faith in God is what gets you into heaven. And, I don’t think anyone here will be surprised if I say that Bikers have a healthy interest in sex. But, what might surprise you, is that the Bible says that the father of all Christians (Abraham) was declared faithful because he believed what God said about him having sex. Let me elaborate.

Romans 4:18-22. – 18 Against all hope, Abraham in hope believed and so became the father of many nations,… You see, God had promised him that he would be the father of many nations… 19 Without weakening in his faith, he faced the fact that his body was as good as dead—since he was about a hundred years old-and that Sarah’s (his wife’s) womb was also dead. 20 Yet he did not waver through unbelief regarding the promise of God, but was strengthened in his faith and gave glory to God, 21 he was fully persuaded that God had power to do what he had promised.

Abraham simply believed that even though he was 100 years old, that God had the power to enable him and Sarah to have sex, so that she could have a child. She did have a child, and many generations later, Jesus, the savior of the world was born to one of their relatives. So now you know, that Salvation is tied to Faith, and Faith was tied to Sex, at least for Abraham, and believing God can be a very good thing. As for me, I want to have a lot of… Faith, how about you?

Today was the annual Chili Cook-off, and we had a great bunch of competitors. I tried most of the versions, though I might have missed one or two. And, since we left before the judging, I can’t tell you who won, but I can tell you which one was the hottest (of the ones I tried). It was definitely the Liberty Hill Gypsy MC. They had two pots, and the “HOT” one was a cooker! Actually they were all great, I don’t know how the judges will decide which one was the best. Oh, well, Someone else will have to fill you in on which one won. Next up was the COC&I (Confederation Of Clubs and Independents) meeting. As you can see from the pictures it was very well attended. they also collected frozen turkeys for several thanksgiving benefit dinners being put on by Texas Vietnam Vets Association for Kerrville Veterans Hospital, Dell Childrens Hospital and Domiciliary of Temple. 48 turkeys were collected, plus some additional cash to help complete the goal of 60 turkeys. Them will be some good eats. After the meeting, the cook-off continues, along with the parts swap out in the parking lot. I bought a couple of Harley history coffee table books for a song (thanks Ragu), but Debbie didn’t find anything she absolutely needed. Be sure to note Debbie’s new camera, the one with the smiley faces on it. She took my picture as I was taking hers. The battle of the cameras. Enjoy. 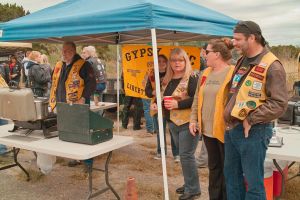 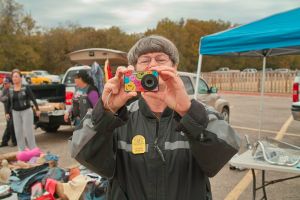 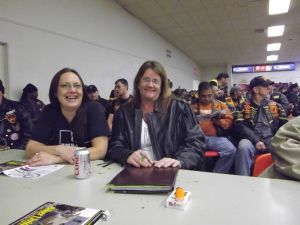 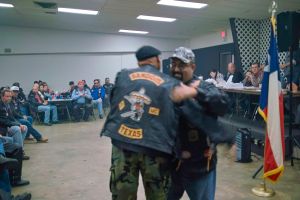 Finally, here is another of my panoramas. This one of the COC&I meeting. CLick on any picture for a larger version.

If you want any even larger versions, just email me.

Debbie and I accompanied by Louis went to the Tornados 10 year Anniversary party this evening at Iron Horse Bar and Grill. Had a good group, the place was pretty packed. They were serving $5 BBQ plates, and the band was pretty good. There was even a bicycle contingency there, as my photo documents. So then, here my pics for your viewing pleasure; 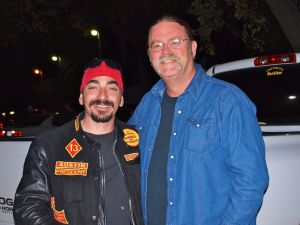 We took Debbie’s bike to Hardtailz Choppers today to get a brake issue looked at, it was quickly corrected and we headed over to Wendy’s for lunch. As for the last picture, don’t ask.

We went to the Free Indeed Celebration event at Austin Christian Fellowship church today. We have been before, but this year they asked us to be exhibitors. So we had a table and displayed several of the CMA tracks and things like the ROT Rally shop rag tracks. We played a CMA video on Debbie’s laptop. We had a good time, had some good conversations, and gave away several tracts and bibles. The event was geared to helping men and women that were released from prison, to get re-integrated into society. Don and Susan showed up as well, and Gary and Sharon from the Taylor chapter arrived a bit later. It was great to have them. The church served a Rudy’s BBQ sandwich lunch with chips, tea and cookies. Yum! The event is put on every year about this time by Texas Reach Out Ministries. TROM Executive Director David Pena and His wife Margarita welcomed everyone. The main speaker was Cody Carlson, former Quarterback for Baylor University and Houston Oilers. Cody’s talk was great, I especially liked the fact that he always referred to us Christians as we “were sinners before God changed us”, not a sinners in the present tense. A point I have been trying to make with all my friends for some time. I may still sin occasionally, but please don’t describe me as a sinner.

Ok, without further delay, here are the pics; 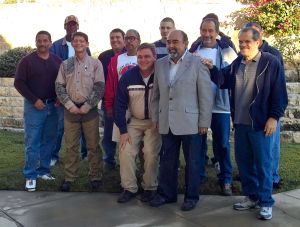 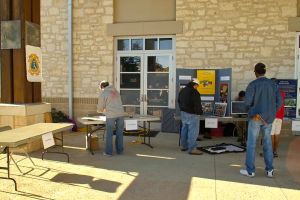 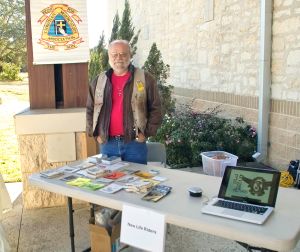